The Golem of Jewish folklore, meaning ‘body without a soul’ or ‘shapeless mass’, is a mythical being molded from inanimate matter – like mud or clay – and brought to ‘life’ by a magical ritual. There are many tales about how this ritual would be performed. In one, the Golem is brought to life when its forehead is marked with the Hebrew letters אמת (‘emet’ meaning ‘truth’). It is then deactivated by erasing the first letter of this sacred word, so that אמת reads מת (‘met’ meaning ‘dead’), and the Golem returns to the primordial mud or dust from where it came. According to legend Adam was a Golem for the first twelve hours of his life, until his creator breathed a soul into his nostrils.

A Golem is a large creature, a simulacrum of a man, without reason or free will, but with the ability to do heavy manual work and offer protection to its master. There is a book, the Sefer Yezirah (Book of Creation), which contains instructions on how to make a Golem, but no matter how obedient and life-like these Golems seemed, they were always but a shadow of a human being.

In Type Face, James Petrucci: New Paintings, we are presented with a series of ten portraits painted on identical 30 x 24 cm panels. On these panels, various pastel shades of blue, brown, green, pink and white come together to form a portrait. Petrucci paints in a haphazard manner, with a fluid, abstract approach to the form, yet somehow, the unblended brushstrokes result in coherent facial features; as in 26 May 2012 where a lightning zigzag of white becomes the highlight on a forehead, while a single swept brush mark loaded with purple, pink and blue becomes the shading of a nose.

Underneath the surface-layer of oil paint Petrucci has prepared a fluorescent acrylic under-painting that peeks through in bright blue, green or orange. The eyes in the portrait series are black and hollow giving the impression of an empty shell, while the oil paint appears to be alive and morphing to curve into a mask. In the mask-like quality of the portraits there is a relationship to primitivism that is reminiscent of traditional ritual masks, where the mask-wearer takes on the spirit of the representation of the mask itself, temporarily surrendering his own identity. And like Picasso’s Les Demoiselles d’Avignon (1907) and the aforementioned Golem, there is a savage element at play and a charged surface energy, as if an alchemic reaction has taken place and the paint is reacting on a molecular level, transmuting from brush strokes to flesh. As our visual perception hovers between reading a shapeless mass and a human face, momentarily, it feels as if the paint is moving into a shape, like the liquid metal T-1000 from Terminator 2: Judgment Day (1991).

Polite ‘blending’ techniques do not exist here; instead Petrucci attempts to coerce the raw material of paint into a representational image. Whilst these painting techniques may appear fast-and-furious, each rudimentary brush mark has been applied in exactly the correct position, so that if you squint your eyes, the paint smoothly and obediently blends into an anonymous portrait (that the artist titles only by a date). Using gestural sweeps, fluorescent colours and anthropomorphic characteristics, Petrucci communicates just enough to leave the viewer room to form a complete picture.

In the exhibition Type Face there is also a light installation entitled Six. In a separate room of the gallery, which has been blacked-out, positioned on a wall are glow-in-the-dark outlines of a crowd of youths – bringing to mind the iconic back-lit scene from Close Encounters of the Third Kind (1977) – simultaneously channeling cave painting and the graffiti décor of a 90’s rave, as the image flashes in and out of sight with a UV strobe light. This club-culture-style wall painting sits unexpectedly well against the small panel paintings in the adjoining room, which hold the primitive intensity of Emil Nolde’s woodcuts and the overtones of sadness of Max Beckmann’s portraits, in a style that has the dark mood and impasto gestures of German Expressionism.

The 1920 film Der Golem, directed, produced and starring Paul Wegener, is one of the first films of the man-made monster genre and an important work in German Expressionism: a story based in a Prague ghetto, where the Jewish inhabitants create a Golem for protection. The Golem, like Frankenstein, is a product of intention and material, animating the inanimate; clay into man, and in his own way, by charming the raw material of pigment and its binder into a recognisable image, Petrucci attempts an animation of his own. 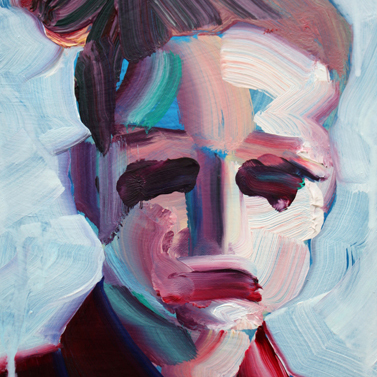 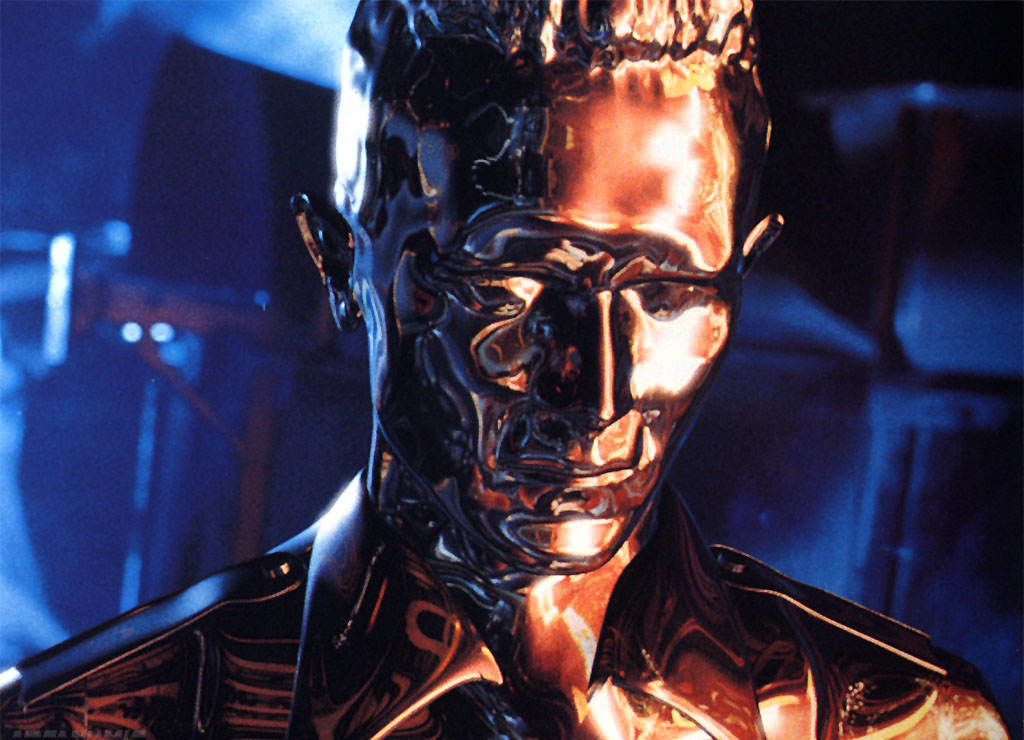 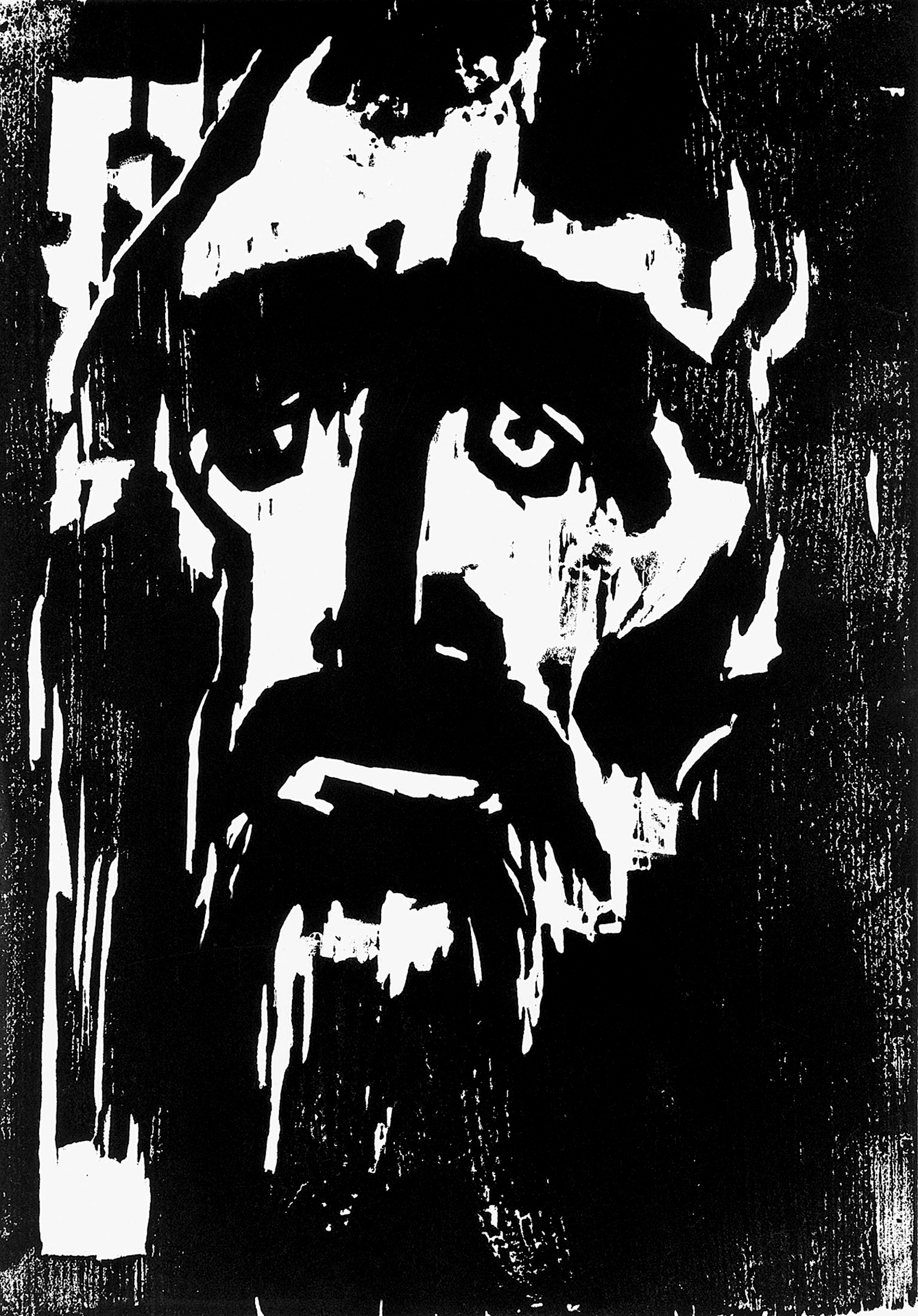 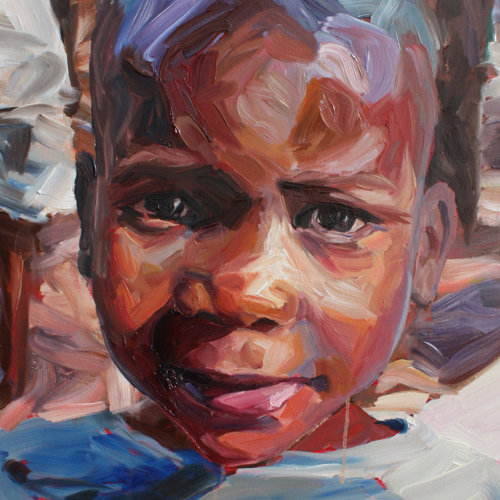